The Bitcoin exchange rate picked up again and is currently relatively stable above $ 7,500. After the last few weeks in the crypto market were rather tough, things are currently picking up again. The question arises: Has the tear valley been crossed?

As usual, the leading cryptocurrency is pulling up the entire crypto market. This is how most altcoins benefit from the current mini rally.

The Ethereum course or Ether Token has therefore gained almost three percent in strength in the last 24 hours. The cryptocurrency number two is $ 133. However, the Vitalik Buterins project could not make up for the losses of the past week – the Ethereum course (ETH) lost more than seven percent strength over the course of the week.

The ripple course (XRP) also shows slight increases. Within one day, the XRP token gained almost 1.28 percent on the way up to $ 0.197.

Even the IOTA course (MIOTA) is currently showing a plus. The token for the Internet of Things was able to leave its all-time low behind at 1.64 percent and is currently at $ 0.1644.

The Bitcoin rate was able to reclaim lost territory of over $ 7,000. After testing the support of the downward trend that has been pursued since mid-August and thus reaching a new annual minimum, he bounced off the said support and is currently applying it to a test of the resistance of the downward channel. The MACD is positive and rising, the RSI is over 50 for the first time since early November.

Both MACD and RSI have formed a bullish divergence with regard to the Bitcoin price since the end of November: lower price minima coincided with higher minima for the indicators mentioned. Only the Aroon indicator is not yet convincing. The overall bullish situation currently invites to a long position.Since we’re still caught in the long-term downward channel, a good first target would be set at $ 8,087.31. Support at $ 7,123.94 is a good stop loss. If the Bitcoin price falls below this level, investors can consider a short position with a target of $ 6,343.71 and a stop loss of $ 7,538.57. 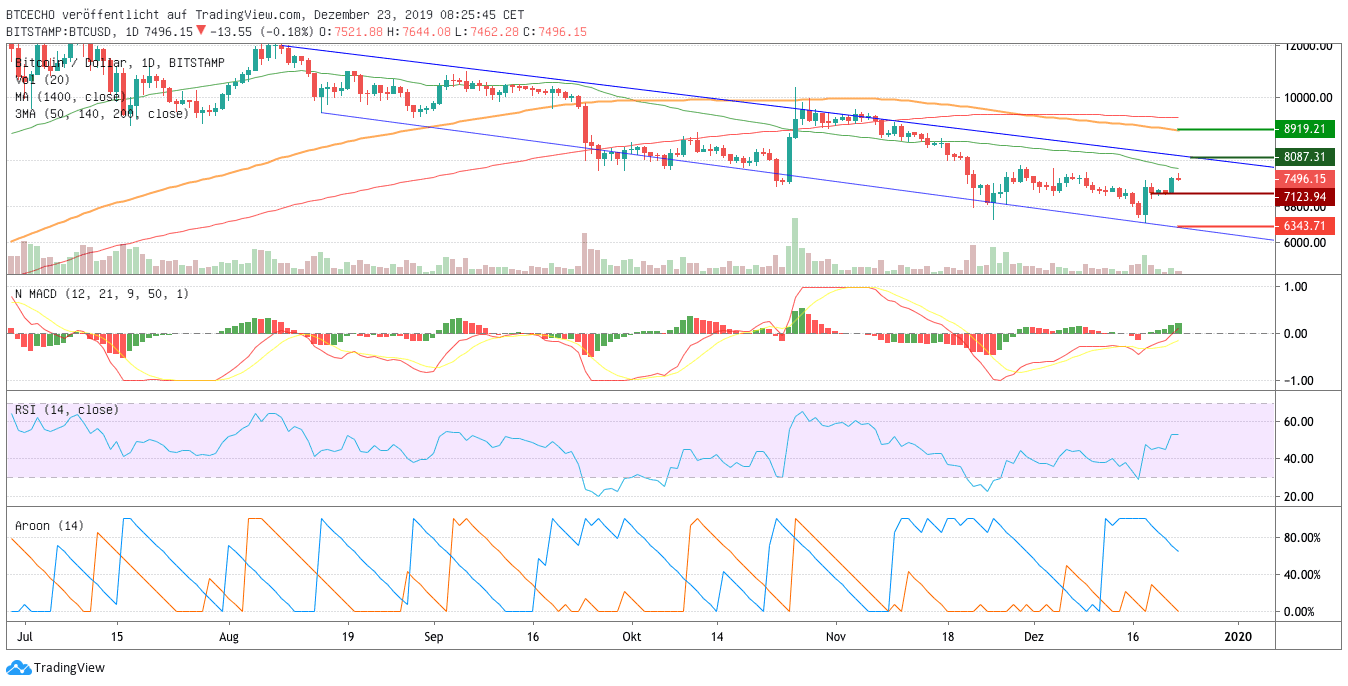 Sentiment on the crypto market is improving

The trader mood on the crypto market has improved again. Accordingly, the Crypto Fear and Greed Index shows an improvement on the previous day – the fear gives way:

The Fear & Greed Index promises an analysis of the Bitcoin market. It measures how the mood among investors is. It fluctuates between the markers Fear (fear) and Greed (greed). The Fear & Greed Index ranges from zero (extreme fear) to 100 (extreme greed). It provides a sentiment analysis that is made up of the following parameters:

Nevertheless: Despite an improvement in sentiment, you should keep an eye on the market – only if you pass the above targets sustainably should you consider them sustainably bullish.

Logarithmic band analysis: Bitcoin in the next bull market over $ 140,000?